With all the   news about the Republicans taking over both houses of Congress, one important (and to me, surprising) bit of news was lost in the clamor:

…a banner election year for women. Come January — when new members are sworn in — there will be at least 101 women serving in the 435 seats across the U.S. Senate and House, the first time in American history that female members of Congress have reached 100. (The number could be higher: Four races with female candidates have yet to be called.)~~www.nj.com 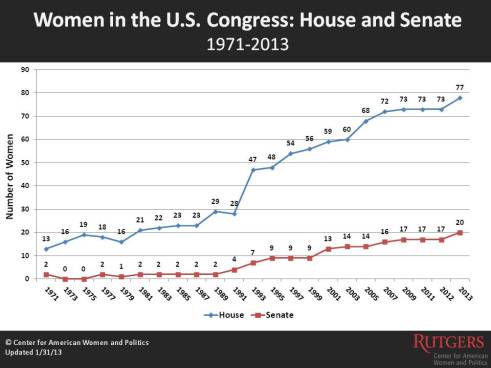 Many Republicans and Democrats will have their eyes on this new Republican majority, though I suspect for different reasons. Some hope that with a majority, the business of government will kick back into gear. Some fear that changes made in recent years, such as ObamaCare, will be reversed. Some wonder how the 2016 elections will be impacted.

But, when I learned about the record number of women now in Congress, my hopes for a better-run government were based more on a different mix of the sexes than a different mix in political parties.

I am not a feminist. In the battle of the sexes, I don’t believe females are the stronger or the smarter. Each “side” has its strengths and weaknesses. However, there are two differences between men and women that I believe may have a positive impact on Congress now that the number of women in Congress is growing.

I first read about these characteristics in John Gray’s Men Are from Mars, Women Are from Venus. Though many have claimed the book had too many generalizations, once I read the book, I began to see the differences Gray spoke about in my own life:

Isn’t that what’s not being done enough in Congress these days? Nobody is talking. That’s why I think more women in Congress will be a positive thing. When problems or disagreements arise, they’ll want to talk about it.

CNN reported that regardless of party affiliation, women in Congress often meet to talk about issues over lunch, or dinner and drinks.

It reminds me of the friendship I share with the Sisterhood of the Traveling Pen. I doubt you could find a more diverse group of women. We differ in our political philosophies, our religious beliefs, our writing styles and genres, our marital and family statuses, our clothing styles, the way we talk–just about anything and everything. We are all different. Yet, we are very close friends who trust each other immensely. And we’ve had many a    conversation (a few that ended with belly-ache laughter) on how to solve the problems of the world.

Okay, maybe the women in Congress won’t have conversations that end in laughter–at least not the belly-ache kind–but if they have the discussions, that’s the important thing. Even if they don’t come to an agreement (often, neither do my “sisters” and I), they will come closer to an understanding of each other’s “side” and perhaps move toward a compromise–another thing too often missing in our government.

No matter your party affiliation, you have to admit that sounds a whole lot better than running to a cave.