This week, I’m featured on the Tumblr blog, Asians Doing Everything. I’m honored to be included with many others who have been featured, and who fit the description: 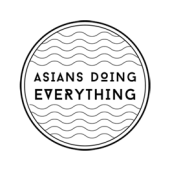 Asians Doing Everything recognizes and celebrates the work being done by Asians and Pacific Islanders around the world. We transcend the roles often given to us by popular media; we’re not just doctors, sidekicks, and nail salon owners…although we are those too. We pursue an infinite variety of jobs. But we are also passionate about things not connected to a paycheck. This blog seeks to uncover how we operate as striking, multifaceted, and global movers and shakers within our communities and economies.

Summarizing why I write was a good exercise. In writing, speaking and even my art, I try to foster understanding of “the other side,” regardless of whether that “side” is a different race or culture, (as in The Red Kimono), a different religion, sexual orientation, class, political affiliation…whatever the difference.

As I mentioned in my bio, my parents were from different cultures, religions and political backgrounds. Throughout my life, I’ve experienced both prejudice and acceptance, so I know the hurt of being shunned for who I am, as well as the joy of being accepted.

Today, my friend, Ryder Finnegan, invited her Facebook friends to “Write one true sentence.” After a week of commenting, tweeting, debating and generally trying to open up communications via social media about a protest over a kimono, here’s my one true sentence:

Social media is both beneficial AND detrimental to opening the lines of communication.

In my successes and failures to communicate via Twitter and Facebook, I’ve found the number of characters/words is directly proportional to the quality of understanding.

In the closing sentence of my Asians Doing Everything bio, I summarize:

My hope in both speaking and writing is to help others see things from another’s perspective.

So, I decided to step back from the kimono debate on social media. Too many sound bytes, too much vitriol, too much straying from the topic, too little back and forth discussion, too many straying directions. Most of all, too much DISTRACTION and too little UNDERSTANDING.

My time and my words are much better spent writing my stories.

I’d love to read your comments on:

1 Response to I Write Because…