In a book of writing prompts I have, today’s prompt is:

Pretty appropriate for the last day of 2014, so here’s my stream of consciousness writing:

One Last Thought for the Year

If I can only write about one last thought, shall that thought be about memories of the past year? Or shall I write about my hopes for 2015? 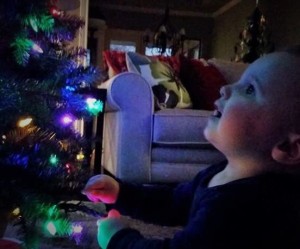 If I were to summarize 2014 in my last thought, I would think about how full and rich my year has been. Filled with days of experiencing life through Tommy’s eyes, appreciation that I’ve been given another chance at the joy of playing with a child, (I’ve always regretted that I didn’t take the time to “play” more often with my own children) and the freshness of learning new things long ago taken for granted.

But I’d also have to write about all the ways Steve and I have grown together, how amazed I am that with all the changes and stresses in our lives in the last year, we survived them with hardly an argument, but with compromise, all the while learning new things about ourselves and each other.

Obviously, reflecting on 2014 would be one long, last thought.

So, what about writing about my hopes and goals for 2015? It’d be pretty much the same thing I wrote for on the eve of 2014:

I’d make writing goals again, of course. Hopefully I’d be more successful in 2015 than I was in 2014. Here are my writing goals from 2014, with a graphic to indicate which ones were completed:

50% success rate–not so good. I think I need to set more measurable goals for 2015, so it looks like that would best be accomplished in a separate blog post. Again, not a good one for my last thought.

That leaves me with now. Right now. So, what am I think about right now? Gratitude for this moment. Because no matter what happens before or after, this present moment–the sound of a clock ticking, the scent of coffee, feeling healthy and happy–that’s all there really is. Now.

The past is past, and thankfully filled with happy memories. The future is, well, obviously hard to predict and plan too much for.

12 Responses to One Last Thought