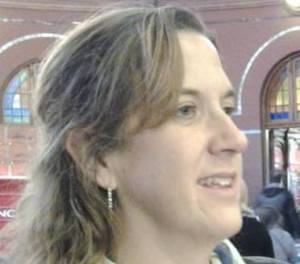 Margo L. Dill had been my Facebook friend for some time until I finally got to meet her at last year’s Ozarks Writers Conference in Eureka Springs. Her most recent book, Caught Between Two Curses, was released in March and today, I’m excited to introduce you to this author, editor, blogger, speaker, reviewer (she reviewed The Red Kimono for The News-Gazette) and of course, wife and mom.

First, here’s a bit about Margo:

Margo L. Dill is the author of Caught Between Two Curses, a YA light paranormal romance novel about the Curse of the Billy Goat on the Chicago Cubs, and Finding My Place: One Girl’s Strength at Vicksburg, a historical fiction, middle-grade novel. She currently has two more books under contract–both are picture books–with High Hill Press and Guardian Angel Publishing. Publication dates of both are to be determined.

Besides being a children’s author, she is also a freelance editor with the business, Editor 911: Your Projects Are My Emergency! and she is part of the WOW! Women On Writing e-zine’s staff as an editor, blogger, instructor, and social media manager. She is also an editor for High Hill Press and specializes in memoirs, historical fiction and children’s and YA novels.

Margo loves presenting workshops to writing groups and school groups. When she is not writing or editing, Margo loves to spend time with her husband, stepson, daughter, and crazy Boxer dog, Chester. She lives in St. Louis, Missouri; and if she could eat out every day, she would! She is also a member of the St. Louis Zoo, and this is one of her family’s favorite places to go!

Find out more at http://margodill.com/blog/

JAN: What is your elevator pitch for Caught Between Two Curses? 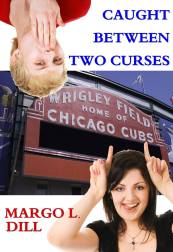 MARGO: A 17-year-old quirky, pretty orphan, living with her aunt and uncle in Chicago, must race against time to break a curse on her family, while also deal with a boyfriend who wants to have sex and growing feelings for her best friend. This curse affects all her male relatives and is connected to the Chicago Cubs Curse of the Billy Goat.

Synopsis of Caught Between Two Curses:

Seventeen-year-old Julie Nigelson is cursed. So is her entire family. And it’s not just any-old-regular curse, either—it’s strangely connected to the famous “Curse of the Billy Goat” on the Chicago Cubs.

Julie must figure out this mystery while her uncle lies in a coma and her entire love life is in ruins: her boyfriend Gus is pressuring her to have sex, while her best friend Matt is growing more attractive to her all the time.

Somehow, Julie must figure out how to save her uncle, her family’s future, and her own love life—and time is running out!

JAN: Tell us about your protagonist(s). What is the conflict and how does it change them?

MARGO: Julie is a 17-year-old high school student, living in Chicago, IL with her aunt and uncle because her parents died in a fire fourteen years earlier. She is pretty, fairly popular, friendly, loyal, a nervous wreck, caught up in the past, and a lover of everything Katharine Hepburn. When Caught Between Two Curses opens, she thinks her biggest conflict is her boyfriend, Gus, and his pressure for them to have sex. She’s in love with him, but she’s not ready for sex. Then he wants to break up. So, she has to decide if she sticks to her moral beliefs or if she does what he wants. But then life turns upside down when her uncle goes into a coma at a Cubs game after eating a bratwurst, and she discovers there’s a curse on her family–put on by someone that hated her grandmother, whom Julie has never met. Now she must discover how to break the curse and save her uncle–because it seems as if she is the key. It changes her because she starts the novel very wishy-washy and unsure that she can really do anything on her own. She ends the novel with more self-confidence and the beginning of figuring out what she wants for her future and who she wants in it! 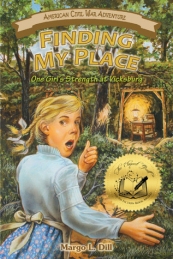 JAN:  You’ve also written a middle-grade historical fiction, Finding My Place. How did you do the research? Did the necessary research add a significant amount of time to complete this book?

MARGO: YES! This is the reason why it’s a stand-alone, although I did leave it open for a possible sequel, but the research–goodness. Even when I thought I was finished, meaning I traveled to Vicksburg, toured old homes and talked to historians, read primary resources, read a couple other novels set during that time, I still had more research to do while I wrote. I would usually use the Internet for questions that popped up while I wrote, such as what they might have eaten or what a funeral might have been like during that time. I also had an amazing critique group, and several knew about the Civil War, so they would catch words and phrases that were too modern.

JAN: How did the story of Caught Between Two Curses come to you? Did the story change as you wrote it?

MARGO: Two news stories in 2003 finally inspired me to explore a question I had always wondered: why do some people survive accidents or tragedies and others don’t? Are the survivors supposed to DO SOMETHING before they die? The two news stories were when Steve Bartman interfered with a foul ball at a Chicago Cubs playoff game, and everyone blamed him for the Cubs not making it in the World Series. I thought, It’s not Steve Bartman’s fault (of course); The Curse of the Billy Goat strikes again.

The second story was about a little girl who had survived a car crash where her parents died. She was actually in the car for a few days before the police found her, and she ate snacks from her diaper bag. So I created 17-year-old Julie whose parents both died under mysterious circumstances in a fire when she was three. When the novel opens, Julie thinks her only problem is that her boyfriend wants to have sex, when she’s not ready. But it turns out she seems to be the one in her family destined to break two curses that are killing her loved ones. This is the final story I ended with, but it came a long way from the beginning when it was mostly about the curses and Julie’s past.

JAN: What has been your greatest challenge as a writer, and how have you overcome it?

MARGO: REJECTION! It happens at all stages of the game. Even once you have a book contract and a book comes out, you still deal with rejection–new books aren’t what people are looking for or libraries aren’t interested or a reader gives a bad review. I overcome it by knowing this is a subjective business and that readers’ taste differ. I also believe that a lot of the power to overcome rejection is in my control because I can work harder. I can create a better manuscript. I can find readers who like books like mine.

JAN: What are you working on now?

MARGO: I’m actually working on two novels–I kind of go back and forth. The first is a middle-grade mystery which is almost finished and is about a super sleuth who gets his own trophy stolen and has trouble solving this mystery that is so personal to him.

The second is in the draft stage–it’s a YA, told from the point of view of two male protagonists who are affected by a shooting in a drug store in their community. One teen is the son of a police officer who is shot; the other teen is the son of the shooter.

JAN:  You’re a writer, editor, teacher and speaker. Which of these gives you the best opportunity for impact?

MARGO: I think this is a hard question to answer because each of them affect people in a different way. As a writer, I hope to bring joy and entertainment to young readers while also giving them some issues to think about. As an editor and teacher, I help a lot of writers pursue their dream of writing. I love working with people to improve their manuscripts and figuring out exactly what their story is about. As a speaker, I want to inspire others to follow their dreams and be the best person they can be–whether they are young, old, or in-between. So. . .I just can’t choose.

Thanks for visiting with us, Margo. It’s been fun getting to know a little bit about you “behind the scenes,” and I look forward to reading Caught Between Two Curses!

This entry was posted in Interview and tagged Caught Between Two Curses, Chicago Cubs, Curse of the Billy Goat, Finding My Place, historical fiction, Margo L. Dill, YA, Young Adult. Bookmark the permalink.